We always called it The Moth Hall, and for a while it was where Dad was probably drinking. But it was more correctly called Platberg Shellhole of the M.O.T.Hs – The Memorable Order of Tin Hats. And there was an older shellhole before that one – an older ‘Moth Hall’. It was down near the railway line; down near the Royal Hotel.

This was where old servicemen would lie to each other and themselves in song:

They Just Fade Away.”

Back then they were all survivors of WW1 and WW2. Only later did they take in ever-more members from ever-more wars. And there’s an endless supply of those; the armaments industry sees to that.

The things I remember about the old shellhole was playing in the dark next to and behind the building – big adventure; And seeing 16mm movies, with big reels whirring in the dark; some were sponsored by Caltex and other companies; I remember Hatari! about yanks in darkest Africa, catching animals for zoos; It starred John Wayne, but who was he to us, back then?

What the folks would remember, if the truth be told, would be booze and sing-alongs and booze and skits and booze and plays; these were the order of the day. * click on the pic * if you want to read some names. 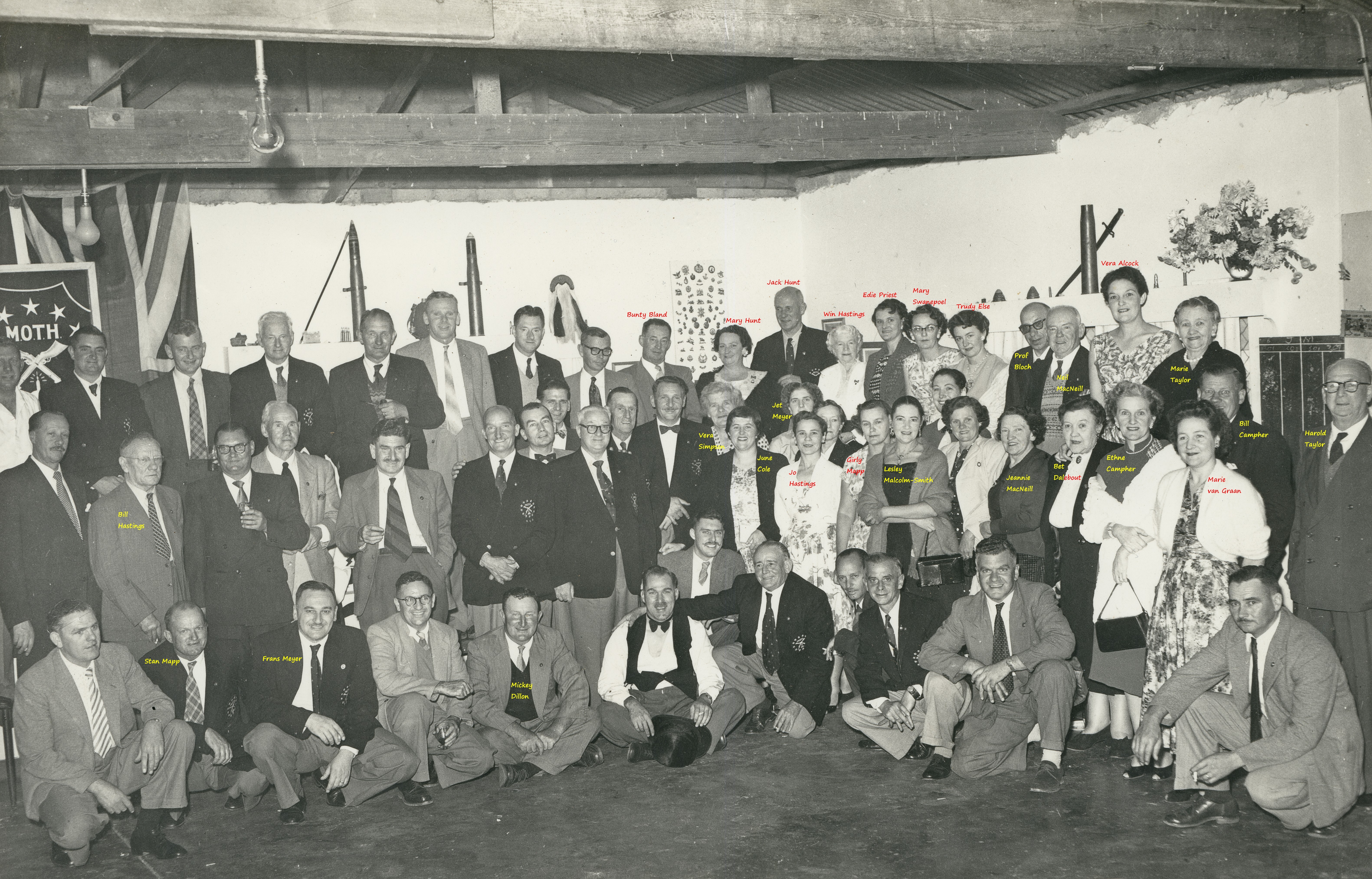 Seated on the left next to Mary Swanepoel and Trudi Else in full voice, is Harold Taylor, veteran of WW1. Under those voluminous trousers is one wooden leg. The other is buried at Delville Wood. He would take his turn standing next to the piano singing: 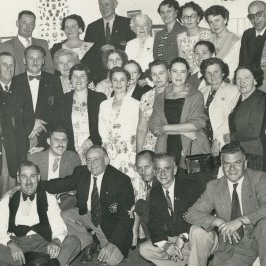 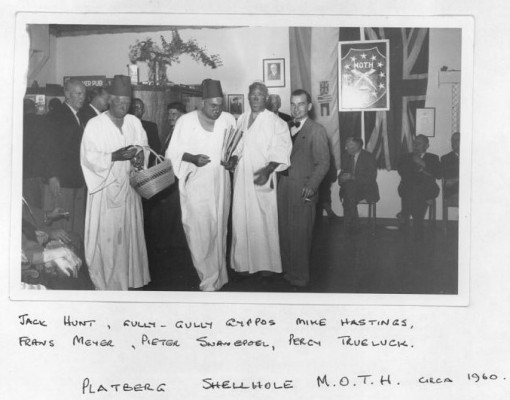 The old MOTH hall was not opposite the Royal Hotel but in the vicinity. In fact it was next to Llewellyn & Eugene Georgiou’s home. It was near the railway line below the G’s house.

I remember Ray Taylor who had some shrapnel in his head, not Harold with a wooden leg; also Uncle Jack Hunt; Arthur Gray & of course your folks. I also remember playing in the dark outside. I remember my first sip of beer which I did not like; but I overcame this in years to come to absolutely love it!

I remember the song A Long Way To Tipperary; The piano was very rickety, as was the wooden floor, which squeaked with the slightest step. On the walls were very big portraits of Winston Churchill & Jan Smuts; Dan Pienaar was also there, but smaller; and a pin-up of Jayne Mansfield. This pin up made it to the “new” Moth Hall.

One thing I did not like was helping my Old Man clean the Shellhole on a Saturday morning; the smell of stale beer & cigarette smoke remains very vivid in my memory.

The real Niccolo Paganini – and probly why the ole man wanted to be him:

When he was eighteen the young virtuoso escaped his father’s control, following his elder brother to the Tuscan city of Lucca. “Freed from parental control, Paganini embarked on a life of famous excess. As he later put it, ‘When at last I was my own master I drew in the pleasures of life in deep draughts.’ He would spend the next twenty-seven years in Italy, filling his life with music, love affairs, and gambling, interrupted by long peri­ods of utter exhaustion.”