In 1969 a bunch of us were taken to Durban to watch a rugby test match – Springboks against the Australian Wallabies. “Our” Tommy Bedford was captain of the ‘Boks. We didn’t know it, but it was to be one of his last games.

Schoolboy “seats” were flat on your bum on the grass in front of the main stand at Kings Park. Looking around we spotted old Ella Bedford – “Mis Betfit” as her pupils called her – Harrismith’s English-as-second-language teacher. Also: Springbok captain’s Mom! Hence our feeling like special guests! She was up in the stands directly behind us. Sitting next to her was a really spunky blonde so we whistled and hooted and waved until she returned the wave.

Back at school the next week ‘Mis Betfit’ told us how her daughter-in-law had turned to her and said: “Ooh look, those boys are waving at me!” And she replied (and some of you will hear her tone of voice in your mind’s ear): “No they’re not! They’re my boys. They’re waving at me!”

We just smiled, thinking ‘So, Mis Betfit isn’t always right’. Here’s Jane. We did NOT mistake her for Mis Betfit.

Stop Press! Today I saw an actual bona-fide example of this! Schoolmate Gerda has kept this for nigh-on fifty years!

Tommy’s last game for the Boks came in 1971 against the French – again in Durban.

In matric the rugby season started and I suddenly thought: Why’m I playing rugby? I’m playing because people think I have to play rugby! I don’t.

It caused a mild little stir, especially for ou Vis, mnr Alberts in the primary school. He came up from the laerskool specially to politely voice his dismay. Nee man, jy moet ons tweede Tommy Bedford wees! he protested. That was optimistic. I had played some good rugby when I shot up and became the tallest in the team, not because of any real talent for the game – as I went on to prove.

Meantime Jane Bedford has become famous in her own right in the African art world, and sister Sheila and Jane have become good friends.

I was warmly welcomed by the friendly Native American folk in Apache. I really enjoyed them and I think they enjoyed me. They invited me as their guest to a Pow Wow one night.

Here’s a teepee in the Apache showgrounds. 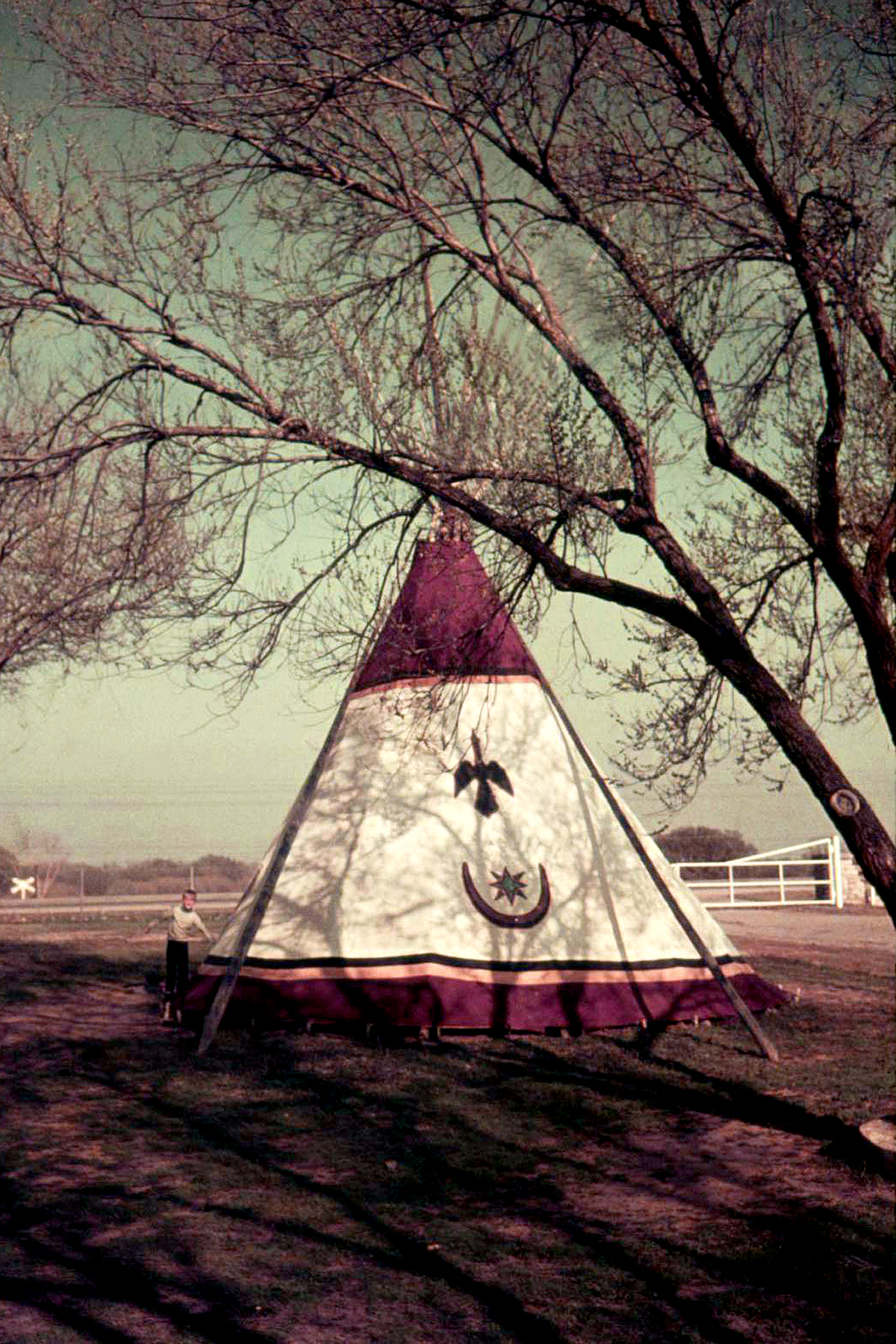 At school the American Indian society presented me with gifts. Debbie Pahdapony Grey does the honours: 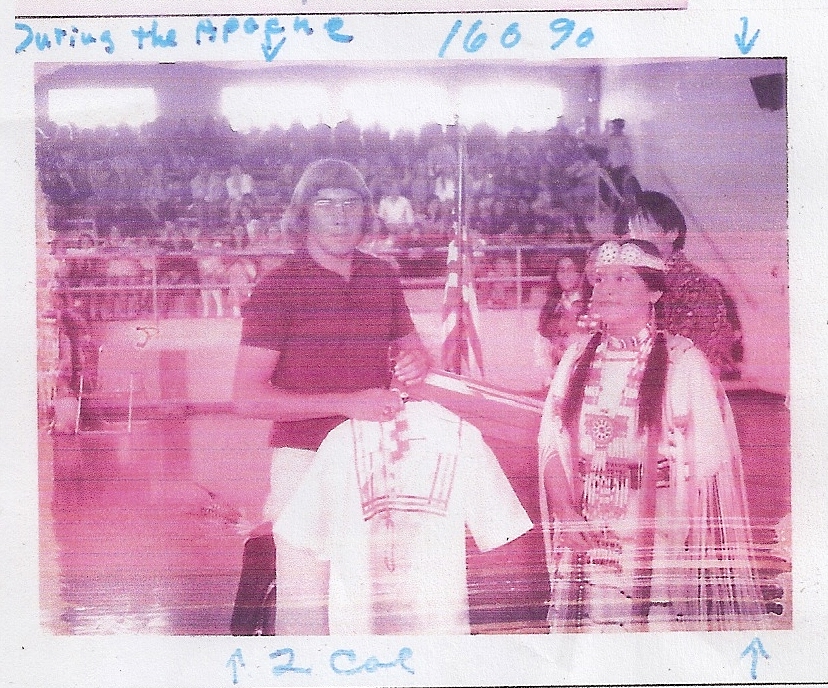 Oklahoma was Indian Territory before we whites stole it all back, and there’s quite a bit of Indian history about. Read something about it here: http://www.smithsonianmag.com/history/the-shocking-savagery-of-americas-early-history-22739301/

For more, read Harvard historian Bernard Bailyn, who has revealed the very ugly, savage treatment of the indigenous Americans in his book The Barbarous Years. 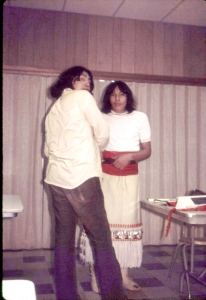 Museum stuff at Fort Sill north of Lawton, south of Apache. Apache chief Geronimo died here, 23 years after being taken captive. His Apaches were the last tribe to be defeated. 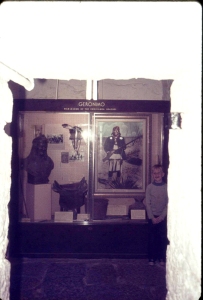 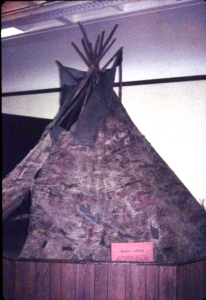 Earliest Period – 1830
The tribes usually described as indigenous to Oklahoma at the time of European contact include the Wichitas, Caddos, Plains Apaches* (currently the Apache Tribe), and the Quapaws. Following European arrival in America and consequent cultural changes, Osages, Pawnees, Kiowas and Comanches migrated into Oklahoma, displacing most of the earlier peoples. Anglo-American pressures in the Trans Apalachian West forced native peoples across the Mississippi River; many including Delawares, Shawnees and Kickapoos-found refuge or economic opportunities in present Oklahoma before 1830. However, some of those tribes split in the process.

*Naisha-traditional reference to the Plains Apache

1830 – 1862
The Indian Removal Act of 1830 culminated federal policy aimed at forcing all Eastern Indians west of the Mississippi River. The Choctaws, Cherokees, Creeks, Chickasaws and Seminoles–the “Five Civilized Tribes”– purchased present Oklahoma in fee simple from the federal government, while other immigrant tribes were resettled on reservations in the unorganized territories of Kansas and Nebraska. Passage of the Kansas-Nebraska Act in 1854 precipitated further Anglo-American settlement of these territories, setting off a second wave of removals into present Oklahoma, which became known as “Indian Territory.” In 1859, with the state of Texas threatening genocide toward Indians, several tribes found refuge in the Leased District in western Indian Territory.

1865 – 1892
The Civil War (1861-1865) temporarily curtailed frontier settlement and removals, but postwar railroad building across the Great Plains renewed Anglo-American homesteading of Kansas and Nebraska. To protect the newcomers and provide safe passage to the developing West, the federal government in 1867 once again removed the Eastern immigrant Indians form Kansas and Nebraska reservations and relocated them on Indian Territory lands recently ceded by the Five Civilized Tribes. The same year, the Medicine Lodge Council attempted to gather the Plains tribes onto western Indian Territory reservations. Resistance among some resulted in periodic warfare until 1874. Meanwhile, the last of the Kansas and Nebraska tribes were resettled peacefully in present Oklahoma. Geronimo’s Apache followers, the last to be defeated, were established near Ft. Sill as prisoners of war.

It was quite a year. I had shot up and was the tallest blonde in the team. Coenie Meyer was the only other one, but he was a stocky centre and I was a lanky lock in the serious half of the team, the half that did the hard work and won the ball – only for the frivolous half to donate it to the opposition, starting the whole process over!

But our real strength lay in an outstanding flyhalf called De Wet Ras; and in great teamwork and determined tackling.

We were coached by a bespectacled tennis champ called Bruce who inspired us to give our all. His sidekick Ben backed him up and supported us – a kind soul was Ben Marais. We beat all-comers and moved on to play against bigger teams. We drew one game against Bethlehem Voortrekker 0-0, our ‘winning’ De Wet Ras drop kick sailing high directly above the right upright, so the ref did not award it. We beat them in a re-match 8-3.

We were the Harrismith under thirteen team of 1967, playing in bright orange, looking for all the world like mangoes complete with little green leaves on top and some black spots below! 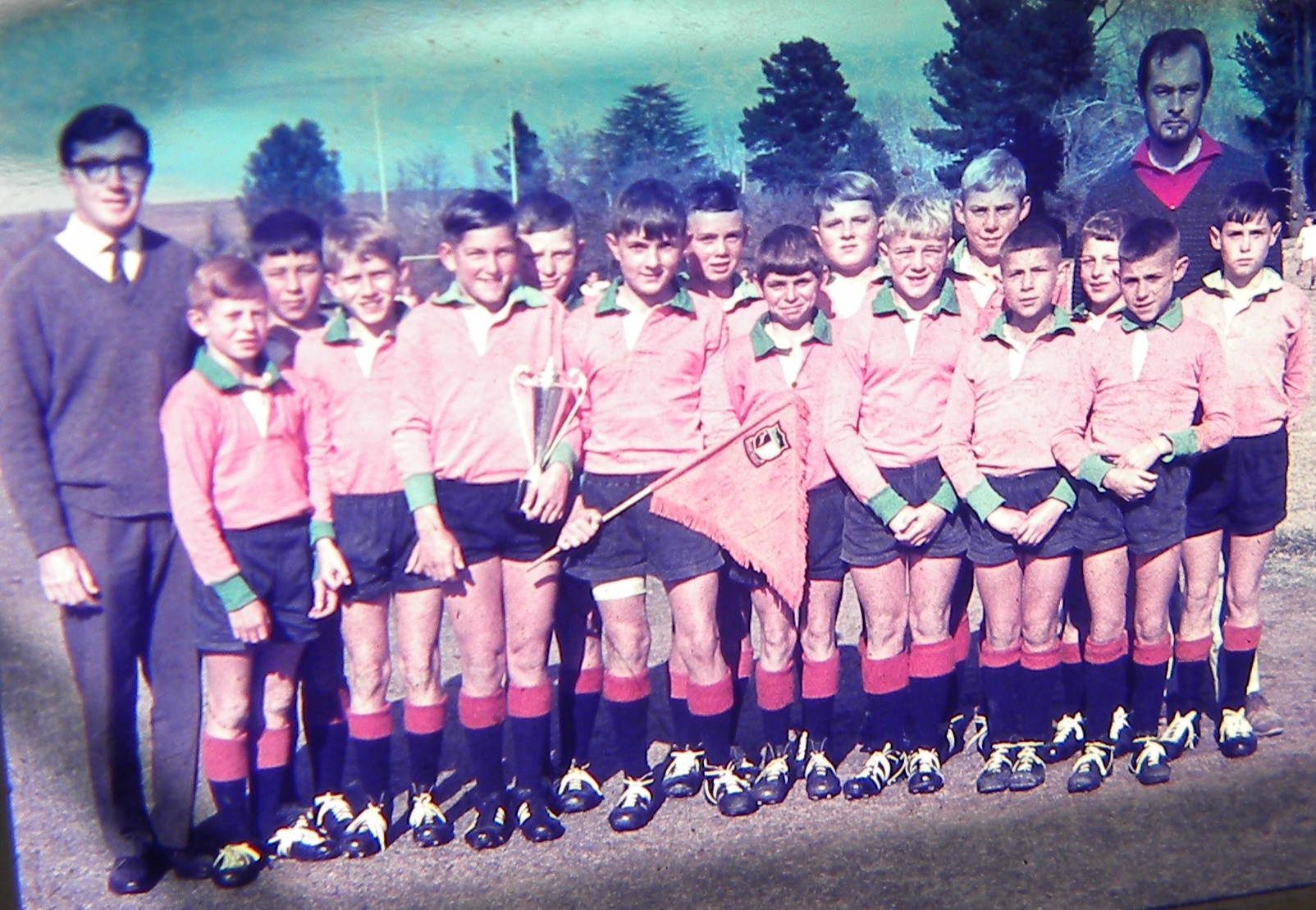 At the end of the season we were unbeaten and happy.

But then we read in the newspaper, the Engelse koerant, The Friend of Bloemfontein:

And they weren’t talking about us – it was an u/13 team from Virginia. We thought: Free State Champs? Like Hell! We also thought: Where the hell is Virginia? That doesn’t sound like an egte Free State dorp.

Bruce Humphries phoned them and challenged them to come and play us. ‘No, we’re Free State Champs,’ they said, ‘Can’t you read? You’ll have to come to us!’

Off we went to Virginia in Bruce’s new 1966 white Ford Cortina and Giel du Toit’s tweede-hands black Mercedes 190 – about 1959.

There we watched their second team play Saaiplaas, a little mining village team with an egte Free State dorp name. We cheered Saaiplaas on and exhorted them to victory! I can still hear our hooker Skottie Meyer shouting mockingly – he was full of nonsense like that, onse Skottie – “Thlaaiplaath!! Thlaiplaath!!” They beat the Virginia seconds 3-0, their first defeat of the season.

Our turn next and the Saaiplaas boys did their best to be heard above the din of the enthusiastic local Virginia supporters. It was a tight match but we had the edge, our left wing Krugertjie being stopped inches from the left corner flag and our right wing Krugertjie pulled down inches from the right corner flag. Yep, identical twins, find them in the pic. The difference at the final whistle was a De Wet Ras drop goal from near the halfway line. 3-0 to us to complete a bad day for ex-Free State Champs Virginia. Which they pronounced Fuh-Jean-Yah.

What’s Next?
Now Bruce Humphries had the Free State’s biggest fish in his sights: Grey College Bloemfontein. No, they didn’t really think they’d want to play us; and anyway they were off on a tour to Natal that week, thank  you. ‘Well’, said Bruce ‘You can’t get back from Natal without passing through Harrismith, and you wouldn’t really sneak past us with your tails between your legs, would you?’

So the game was on! That day the pawiljoen at the park was packed with our enthusiastic supporters and cars ringed the field. Our followers’ numbers had grown as the season progressed and excitement at our unbeaten tag increased. No Grey College team had ever played in this little outpost of the British Empire (yes, we were that, once!) before.

Another tough game ensued, but a try just left of the posts by the tallest blonde in our team was the difference: We beat them 8-3, all the other points being scored by our points machine and tactical general De Wet! Die Dapper Generaal De Wet!

see: Not that Generaal De Wet.

Beating the Rest
When it came to selecting an Eastern Free State team, the other schools introduced a twist: Not only did you have to be under thirteen, you also had to be in primary school! This excluded a few of our boys, who were in Std 6 (Grade 8). Only four of our team were chosen. So we challenged them to a game. Bruce told them it would do them good to have a warm-up game against the rest of us before they went to the capital of the province, Bloemfontein to play in a tournament. Having been chosen as reserve, I was lucky: I could still play for ‘us’! Plus we ‘innocently’ added Gabba Coetzee to boost our depleted team – with their knowledge and permission. He was in Std 6 and just too old to actually be under thirteen. He was a legendary machine of an eighth man!

On the LEFT: Bruce Humphries (coach); On the RIGHT: Ben Marais (assistant coach)

The first time I ran from the cops was about 1969 in the wee hours of a Harrismith Vrystaat morning. We were lurking, having climbed out of our bedroom windows to rendezvous on the dark streets of the silent metropolis as unaccompanied minors.

Near Greg’s cafe we spotted one of The SAP’s Finest, drunk behind the wheel of his grey cop van. Remember them? Ford F150’s with that metal mesh over the windows.

Being upstanding citizens we phoned the pulley stasie from a tickey box to report him.

Next minute we heard a squeal of tyres and we were being chased in the dead of night by the drunk himself – his buddies had obviously radioed him. Or maybe his stukkie was on desk duty.

No ways he could catch us fleet-footed schoolboys in his weaving van. We ducked and eventually dived under the foundations of Alet de Witt’s new block of flats and watched him careen past us. We emerged boldly and walked home, knowing we would hear him LONG before he could spot us. Anyway, we didn’t want to be late for school.

No doubt he took another sluk of brandy and went looking for someone dark to beat up.

Chips! The gendarmes are coming!

That was also the last time I ran from the law, come to think of it.