When I got to Apache Oklahoma in 1973 I had already finished high school. Not much effort had gone into my matric and I was keen to put minimal effort into this second matric, or ‘senior year’, at Apache High. In my mind I had been sent to America to socialise and be an ambassador, ‘period’.

So I carefully selected my subjects – I had to take American history – I was OK with that. I learnt about George Washington. I had to take English (compulsory for all foreigners). I added typing, ag shop (agricultural workshop – farming, welding, etc making me a member of the FFA – Future Farmers of America), annual staff (making the school annual, acting as a journalist, selling ads in town – a hoot! Actually, they chose me, you couldn’t just elect to do it. I was lucky). I’m sure there was a sixth. Yes, Oklahoman history, I think. My mind wasn’t really on these details.

Here’s me focusing on my typing. I’m with fellow annual staffers Robbie Swanda and David Lodes slave over their hot typewriters. I reached a blistering 19 words a minute with ten mistakes.

Typing – roaring along at 19wpm with 10 mistakes 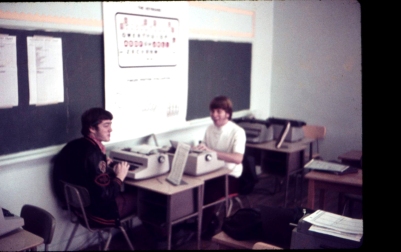 When I told host Dad Jim Patterson my subjects he grimaced. Then he grinned and said – “Peter, are you sure they didn’t offer basket weavin’!”

Jim was a great teacher. He taught me all about ‘counting fence posts’. He would pack a sixpack of Coors into a coolerbox full of ice and we would drive around the district in his old red Ford F150 pickup along the farm roads with Jim recounting all the tales of who lived where, what they farmed and some history of the area. We were ‘counting fence posts’.

Here’s Jim waking up on the back of that pickup one camping trip:

One reply on “Basket Weaving”