I wrote a letter as a final year optometry student! Astonishing. When could one find the time? To sister Sheila, newly-qualified teacher in Empangeni in Zululand. My news was:

The mighty grey and grey Opel Concorde ‘needs a tjoon up.’

I may not make Rag Ball in Pietermaritzburg this year!

Unhappy with res in Doories; expensive, badly looked after, phones don’t work; fought with matron; moving into communal house 4 Hillside Rd in Parktown, where Glen Barker and Clive Nel stay. ‘Before I go, though, I’m going to raise hell to see if things’ll improve.’ (!)

Steve Reed, Cheryl Forsdick and I baby-sat for Bobby & Jill and Louis & Gail; ‘chaos for an hour, then not too bad. They enjoyed their evening; it had been a long while since they’d gone anywhere.’

Great parties; Braais; a Chinese Dinner-Dance; a cricket day; ‘played our first rugby match in our new kit – pitch black from toes to necks with the only white our optom badge on the pocket and our numbers on the back; Beat engineers 18-0.’

‘Went to the Vaal river for a weekend’s skiing; two of the guys had boats; stayed in a resort – lovely; went to a 21st in Pretoria; Generally busy except for work – work is suffering muchly; latest tests got 50% and 82% – the averages , thought were something like 80% and 95%.’

And all that was in a letter written 10th March!

Went to Pete Brauer and Terry Saks’ wedding in Pretoria. I was best man, had to get on my hind legs. My partner was the delightful Cheryl Forsdick; Lovely evening; Driving back with Clive Nel and the delightful Sandy Norts in Clive’s gas-guzzling white Mazda RX-2 we had a midnight head-on collision; Some drunken idiot turned straight into us on the highway! I was fine but the others got a bit battered, with Clive, driving, the worst. He’s in plaster and on crutches.

Actually, none of that. A lot of truth was spoken. Which led to a lot of laughter.

Zena laid on a wonderful spread and we sat around a colourful table on her Sandton patio.

Schoeman smuggled in some gin n meths in an expensive bottle; Zena provided wine and buckets she said were gin glasses – old soaks have all sorts of tricks! Brauer provided beer; I just drank.

The afternoon whizzed past and all too soon we had to shuffle off to take our other meds.

We should do this every forty three years.

Is a gathering of presbyopes a parliament of presbyopes? I think we were more a chuckle of presbyopes. While searching I did find these: an unhappiness of husbands . . a tedium of golfers . . and – not being one – I made up a yawn of grandparents.

PS: Soon after this came lockdown and our little group of six turned into a wonderfully convivial whatsapp cartel, sharing advice, support and look sharp! in equal measure.

I think that’s Jacqui’s correct surname. She was ___ way back in Harrismith in 1972!! She’s having what sounds like an adaptation problem with new multifocals. Thanks so much for agreeing to check her over. Cheers – Pete

PS: I will definitely commit to making a trip behind the boerewors curtain. I have abandoned the kids a couple of times this year and the house didn’t burn down, so I think I must keep on doing it more and more.

Zena: Can’t think of anything nicer than an afternoon with old friends. They are so few and far between these days.

Pete S: Thanks again. Brauer thinks a get-together is “a good eye dear”

On Thursday 21 November 2019, Zena Jacobson wrote: Great. Tell me when you want to cross the boerewors curtain and I will arrange a get together.

Pete S: In the new year. We need to get Terry into the loop. She’s Brauer’s memory glands.

Zena Jacobson wrote: Yes. I’ll set up a WhatsApp group for us, and we can chat together.

Pete S: Excellent. Brauer can sponsor the event. He must be flush with cash as he has just revamped his practice with bells and whistles and open windows, no vertical blinds.

And lo! It came to pass.

How fortuitous, as we formed a lovely support group through lockdown.

As a check on my powers of prediction: My house did not burn down, but you will remember I was distracted for a while in Zena’s garden on an over-long phone call: Jessie had fallen down after trying to drink as much alcohol as her more experienced friend. Did she inherit my genes or summing, dammit?!

Terry saved the situation with a sensible suggestion later that night when we were back in the gramadoelas: Send her to hospital.

Alcohol poisoning. They put her on a drip.

* sigh * If only she’d inherited my fine singing voice instead.

We were in second year and had just moved out of downtown Joburg and Eloff Street to the salubrious semi-suburban delightful area of Doornfontein which was once Joburg’s premier suburb where all the gold mining magnates and Randlords lived and built their mansions.

So some final year students asked us to help them in their research for their – whatever.

It was very formal. We had to – No, you can’t have a drink yet; Hey! Step away from the drinks table, we need baseline levels before you . . you have? Well, how many? SO many? Well, quick, come, let’s measure you before – Hey! Not another one . .

Well, give them their due, they tried their best and we did our best and it was a WONDERFUL evening filled with laughter and witty repartee and I don’t know if they got any data but we did get the promised drinks and they didn’t need to return any unopened bottles to the grog shop, which I’m sure saved them a lot of bother..

Quite a lot was learned, too. Like if you give a person who has had one too many even a little bit of vertical prism he will push the phoropter away and make barfing noises and run out of the clinic. That might come in handy to future researchers, and I give it here free for anyone to use.

In final year, Brauer, Zena Jacobson and I did some more serious research, popping contact lenses into people’s eyes and then forgetting about them. My eyes and Pierre Leibbrandt’s eyes, as two f the guinea pigs I ca remember. Silicon extended wear we called it. I think our verdict was “Not Yet.”

Stephen Charles Reed was the laat lammetjie son of Vincent and Doreen Reed. Vin and Dor. Butch was the big black Labrador in residence.

Vincent was hizzonner, the Lord Mayor of Clarens, so although Stevie was by a long shot not their first son he WAS the First Son of Clarens.

In the holidays I would ring up Oom Lappies Labuschagne at the Harrismith sentrale. He would say ‘seker‘ and patch me through to the Clarens telephone exchange – their ‘sentrale‘. The operator lady would answer with a chirpy “Clarr-RINSE”!

Three Four Please. Seemed somehow wrong that their number was 34. I mean, Vincent was the Mayor. Surely it should have been One Please?

“No, Stevie’s not there, he’s at the Goldblatts, I’ll put you through”.

Old Clarens, before the rush. Here’s the Reed’s store. 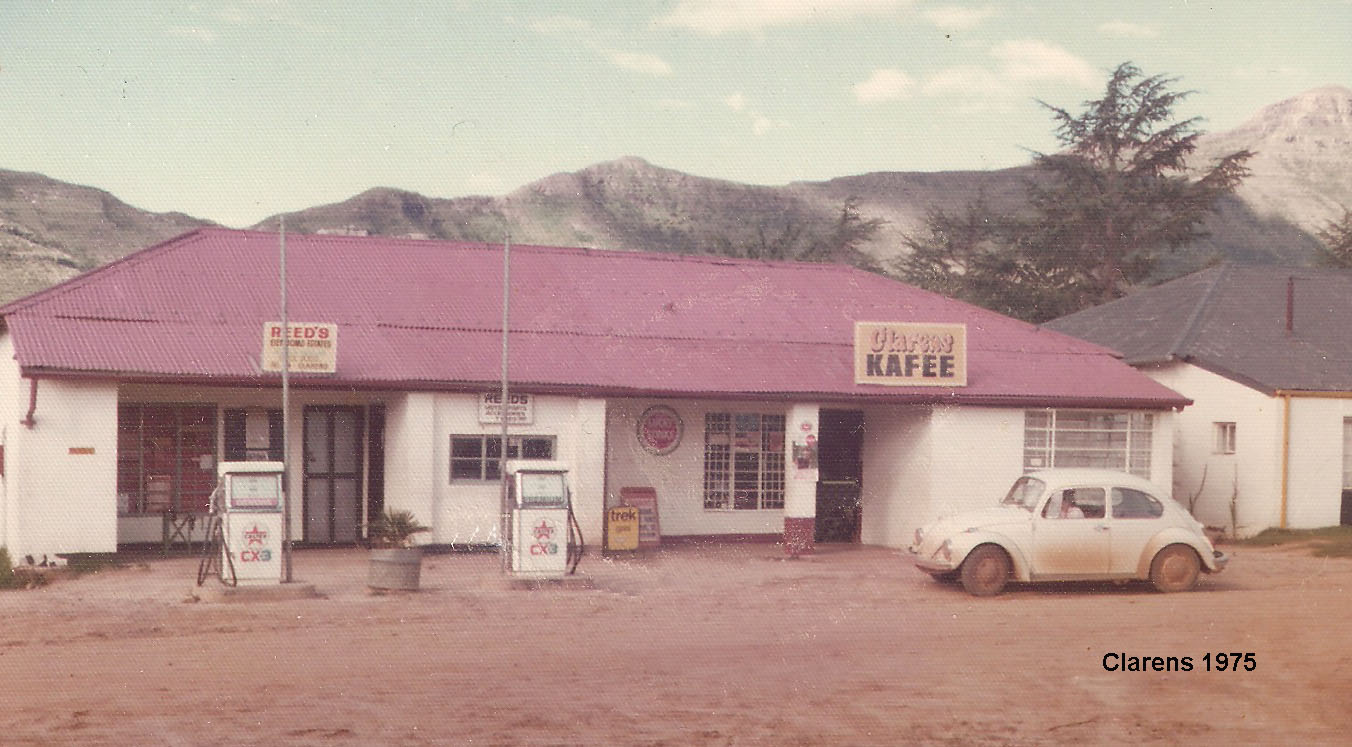 laat lammetjie – afterthought child, unplanned, not to be confused with unwanted

Can’t remember Steve, did your family own the garage? I remember your dad being the mayor though. And I remember the craziest dog I had ever seen called Dennis – a cross between a Labrador and a dachshund or something! I also remember the “centrale” telephone exchange lady, who kept interrupting every three minutes to tell you how long you have been talking, and one day I got irritated, and said something like “aw shut up!” and she scolded me for being so rude! I was mortified!

You should see Clarens now! Although I haven’t been back, it’s the central art and antiques weekend getaway in the country. Quite the arty place, with hotels, B&Bs and coffee shops by the dozen.

OK, Memel didn’t happen in Rod’s time here (he offered to sell me the Memel house when he was leaving for Noo Zealand), but guess what: SANRAL are talking of bypassing Harrismith and running the new N3 past Memel. Boom time! Bust for Harrismith, it would be, though.

Clarens is one of my favourite getaways in SA. Who’d have thought, Mr Reed?! We stayed in that wonderful home with the Stedalls. Had we not owned San Lameer we’d have considered buying it. Fabulous place. Fabulous hosts.

A brief history: Clarens, South Africa, was established in 1912CE and named after the town of Clarens in Switzerland, est around 200CE, where exiled Paul Kruger, who some think a hero of South African independence from Britain, died in 1904 after fleeing there. He fled there – yes, fled, like ‘ran away’, a coward – after calling my great-great uncle – who bravely fought the whole war against the thieving British to the bitter end! The swine!

A company wanting to establish a village in the area bought two farms: Leliehoek from Hermanus Steyn in 1910/11 and Naauwpoort from Piet de Villiers, situated near the Titanic rock. The two farms were divided into erven, and these were offered for sale at fifty pounds sterling apiece.