I was born in Harrismith in 1955, as was Mom Mary in 1928, and her Mom Annie in 1893. Annie thought “the queen” of that little island above and left of France was also the queen of South Africa (and for much of her life she was right!).

To balance that, there’s this side of the family.

I attended the plaaslike schools in Harrismith till 1972. A year in the USA in 1973 as a  Rotary exchange student in Apache Oklahoma. Studied optometry in Joburg 1974 – 1977. Worked in Hillbrow and Welkom in 1978. Army (Potch and Roberts Heights, now Thaba Tshwane – in between it was Voortrekkerhoogte) in 1979 and in Durban (Hotel Command and Addington Hospital) in 1980.

I stayed in Durban, paddled a few rivers, and then got married in 1988. About then this blog’s era ends and my Life With Aitch started. Post-marriage tales and child-rearing catastrophes are told in Bewilderbeast Droppings.

‘Strue!! – These random, un-chronological and personal memories are true of course. But if you know anything about human memory you’ll know that with one man’s memory comes: Pinch of Salt. Names have been left unchanged to embarrass the friends who led me (happily!) astray. Add your memories – and corrections – and corrections of corrections! – in the comments if you were there.

Note: I go back to my posts to add / amend as I remember things and as people mention things, so the posts evolve. I know (and respect) that some bloggers don’t change once they’ve posted, or add a clear note when they do. That’s good, but as this is a personal blog with the aim of one day editing them all into a hazy memoir, this way works for me. So go’n re-look at some posts you’ve enjoyed before and see how I’ve improved over time (!). It’s just as my friend Greg says: ‘The older we get, the better we were.’

I emigrated from Hillbrow and Parktown to Welkom, Free State. The joke goes “I spent a year in Welkom one weekend”.

In about April 1978 Kurt Eggmann, optometrist in the city centre near the famous horseshoe – the dead-centre of town – asked me to work for him. Yes, please, I said. In Hillbrow Graham Bennetto had said he didn’t have enough work for me – he had “let me go” – so I drove off in my grey-and-grey 1965 Opel Rekord in a south-westerly direction, crossed the Vile river and arrived in Welkom, city of sin and laughter.

Got myself a big ole empty flat – my very first own apartment! The Thornes of Barbour & Thorne, estate agents arranged it all. Father and sons estate agents – who became firm friends.   Andy & Evyn, and Dad Wally. They also helped me buy a double bed, a couch and a fridge, you don’t need anything else.

I had left behind the lovely communal house at 4 Hillside Road in Parktown and a lovely lady SSS the delightful Fotherby. I was all swoon and sigh, but the Pru in her soon sorted me out and made me realise life moves on!

I loved the work – I was much busier than I had been in Hillbrow, doing a far wider range of challenging cases. One of my first patients was a keratoconus patient I fitted with her first rigid contact lenses and she saw beautifully as she hadn’t in years! Another early patient put on his minus fours and said he couldn’t see fokol. I tested him again and he was minus two. I said he should see his doc and he went off in a fury, ranting spittle-flecked that I was just trying to rob him and was obviously in cahoots with the GP. Luckily when he finally went, his GP instructed him to come and thank me for saving his life – he was a sky-high undiagnosed diabetic one Fanta Grape away from death. Once his sugar levels had stabilised he actually did come in and thank me! Halcyon days. Being the Vrystaat, the practice had a back door and a tiny separate test room for Nie Blankes, can you believe it!?

Kurt was a character, ex-Swiss squash champion. He had two mates who were also ex-Swiss champions in various disciplines besides drinking and carousing – cross-country running and skiing, I believe. They would meet annually and preen, drink and carouse. He had an old Mercedes sedan and a beautiful Beechcraft Bonanza India Mike Alpha. He kept a little car at  the airport in JHB so when he flew there he had transport.

Winter solstice in 1978 we had a boys night in Kurt’s sauna with Kurt and Johnny Hardman the lawyer; We sat drinking in the heat till it became unbearable, then plunged into the freezing open air pool. Then back into the sauna . . It’s good for you, they say . .

Kurt once asked me to drive his Merc to Joburg while he flew there. I took a young lady pilot with instrument rating along – she was probably going to fly the Bonanza back at night. The Merc got tired in the metropolis of Parys and we had to spend the night there while the local mechanics got it back on its feet again. A few months earlier the Barclays bank manager in Hillbrow had pressed a credit card on me – a ‘barclaycard’ – over my protestations that I didn’t need it. Well, that night I did – I paid for both hotel rooms and the car repair. So where someone had their first campari in Benoni, I had my first credit card transactions in Parys.

Swanning around in my grey-and-grey Opel Rekord Concorde the Welkom ladies must have swooned. Surely. Those days men were men and we had good hard steel dashboards, not soft airbags.

And this is just the FRONT bench seat. They shoulda seen the back seat!

I was due in the army for national service in July but Kurt spoke to the local Nationalist MP and swung it so I only started in January the next year. Strings. Who said corruption is a new invention?

Around 1967 – long before my time there – the Welkom manne decided that the Welkom / Johannesburg road was too dangerous to travel on, and learnt to fly. Together with his great friends Wally Thorne and Heinie Heiriss, Kurt bought a Cessna 182 Skylane, ZS – DRL and operated the aeroplane in an association known at “HET – Air” – Heinie, Eggmann & Thorne. I got this off Barbour & Thorne’s website. 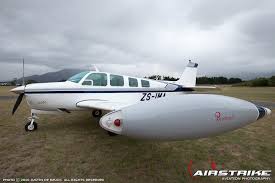 fokol – less than twenty two hundred; less than six sixty; not much