Found some old pics from Apache Oklahoma back in 1973.

Dragging Main in a Ford Mustang with my Olympus camera – and taking original 1973 selfies!

Next, a self portrait at the Swandas home – my last hosts in Oklahoma.

Their farm outside Apache was called ‘The Swandarosa’ – kidding!! Not really – that was Robbie Swanda’s joke. But can you hear the theme tune?

Well, can you believe this!? I was narrowly beaten to the prize of taking the world’s first-ever selfie! In fact the first photographic portrait ever taken might have been a ‘selfie.’

Taken in 1839 by an amateur chemist and photography enthusiast from Philadelphia named Robert Cornelius. Setting up his camera at the back of the family store in Philadelphia, Cornelius took the image by removing the lens cap and then running into frame where he sat for a minute before covering up the lens again.

And hey! Cornelius himself was also a johnny-come-lately! Selfies were started way earlier . . 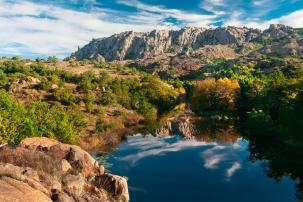 All above are internet pictures. These next I took on a visit in 1973 with fellow exchange students and my Apache host brothers. From left: Dayne Swanda, Kent Swanda, Helen Worswick from Marandellas, Zimbabwe, Jenny Carter from Bromley, Zimbabwe, Jonathan Kneebone from Australia, Evelyn Woodhouse from Durban, South Africa and Robbie Swanda.

Bison, elk and deer are protected on the 23,880 ha wildlife refuge. The refuge also manages a herd of longhorn cattle. The peaks are capped by 540 million-year old granite. Here you can see where the mountains are in SW Oklahoma. Apache is just a few miles north.