Way back in high school we spent a night in an old sparsely furnished Drakensberg farmhouse with no ceilings and a tin roof.

We accompanied Klein Kerneels Retief to his Dad’s winter grazing farm Sungubala below Oliviershoek Pass and were left on our own overnight. Adventure! The skies were overcast and soon there were deep rumblings and flashes of lightning. A heavy rain started falling followed by hailstones. The Drakensberg storm built up until it was a roar and we couldn’t hear each other at all – not even shouting into your ear from an inch away was audible above the tinroof fandango. We jumped a foot high when a massive crack of thunder clapped half an inch above the roof. The loudest bang I’d ever heard.

The next day we explored the soaked veld and ouhout thickets above the house and came across a well-endowed woman lying naked on a huge stone in the woods! Stunning! She sported huge shapely boobs and was a wonder for the eyes of lustful teenagers. She was gorgeous! OK, she was made of stone, but hey, what else did we have?

I have often thought of her over the years and started thinking I may have imagined her but then I read of the stone carvings of the Drakensberg and determined to go and find her.

I took the kids and we stayed at The Cavern, lovely old-style ‘Berg hotel. They loved it.

Asking around, one of their guides said he knew where my statue was and he’d take me there. I packed a rucksack, he packed lunch and off we went for the day, leaving the kids behind. They could not WAIT for me to GO! DAD! as they had discovered an amazing secret: If you gave any hotel employee your room number he or she would give you anything you wanted under the sun. They had discovered the key to endless riches.

When my guide and I got to the little valley in the foothills where he said the statue was it didn’t look right. It didn’t feel like the place I remembered from – uh, 40yrs ago. But there she was: A maiden with luscious boobs carved in stone. 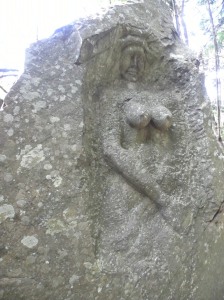 But this lady was standing up, not lying down on a rock in a seductive pose. There is another statue, I told him. This is not the statue I saw. Its beautiful, and thank you, but she is not the lady of my vivid mammaries and my dreams. Ah! He knew where the other one was. It was on private property and he couldn’t take me there. Back at the hotel I asked around and they showed me a picture.

And there she was, exactly as I remembered her.I had not been hallucinating.

Well, almost exactly. Um, I must confess I did NOT notice that she had wings back then, nor that she had clothing. I was remembering naked bunnytail more than dressed wings. Hey, Teenage Testosterone! Vrystaat! 1970! No internet! Very few Playboy magazines! Cut me some slack here! It was a lekker and enhanced memory.

The Story of the Stone Ladies – a tale was told of a reclusive sculptor who fell in love with a trader’s daughter and sculpted these rocks in homage to her. She was a Coventry. We had Coventry twins Glenda & Glynis in Harrismith who came from a Drakensberg trading family. And I think I see a resemblance . . .

Later I found this in a book by Rowan Philp, Rediscovering South Africa: A Wayward Guide.
“There are two boulders hidden deep in a Drakensberg forest which tell a near-Shakespearean tale of obsession, genius, and revenge. Completely unsign-posted, they feature magnificent, life-size sculptures of the same nude, full-breasted woman, painstakingly carved by her lover fifty years ago. The story begins when Willie Chalmers, a wandering artist with a wildly unkempt beard, came to the area from the Kalahari in the 1930’s to learn more about Bushman paintings from a farmer’s daughter, Doreen Coventry. He fell in love with her and spent fourteen months carving her likeness into a flat sandstone rock on her farm, adding a halo and the face of a child alongside. He called it Spirit of the Woods.

But some of his younger in-laws saw him as a con man and a parasite at the family homestead, and at the height of the row, Coventry’s nephew hiked up to the sculpture in a rage and smashed off the nose. So, some say, Chalmers began a second Spirit of the Woods, this time in a secret location almost completely enclosed by other boulders, sometimes working for weeks without a break.”