Dad’s car is missing. Old lady can see where he parks it – right in front of her sunning and exercise stoep of the frailcare section. And it isn’t there. Uh Oh! She’s worried. Later she finds out. ‘Oh, I went shopping. Don’t worry, I got permission from Sister Rose!’

And then again: This time, ‘Oh, my microwave packed up; Johan said he had an old one lying around that I could have, so I drove over to his place and fetched it.’

He’s about halfway through his current five-year validity period. He’s legal till he’s one hundred years and five months old. 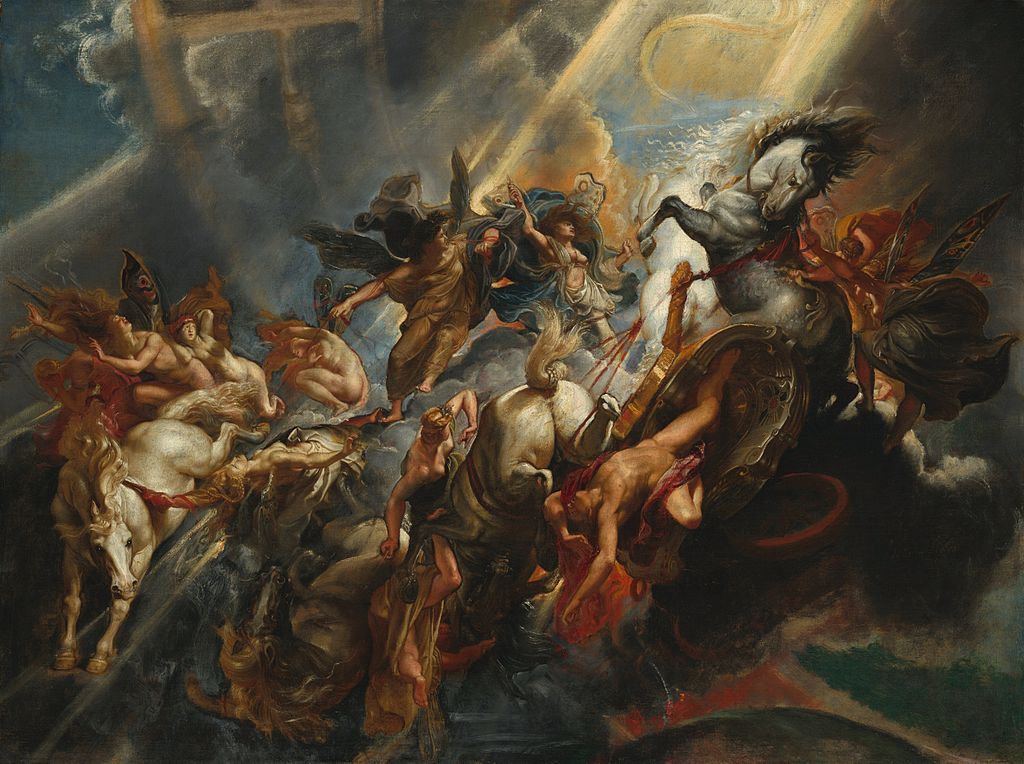 Helios gave his son Phaeton permission to drive the Sun chariot around the Earth. Helios was the Sun God, and a son of almighty Zeus.

Talk about “Don’t Spare the Horses”! Typical youth, the lad Phaeton took some sporting chicks along for the ride, lost control of those horses and the chariot ran amok. The world was at risk of being incinerated!

Grandfather Zeus was thus forced to kill him. Zap! He killed his grandson! Zeus could gooi a mean lightning bolt if you pissed him off.

I’m glad the punishment became a bit milder in our day.

Come to think of it, we never did get punished*. Never got caught, though I can’t imagine our folks didn’t have a shrewd idea of what was happening – at least an inkling. In the early days of illicit driving I used to drive the old blue VW Kombi OHS 153 around our large garden at 95 Stuart Street.

Round the circular driveway, out into Hector Street and back in again. Back near the garages was the washing line and the Kombi just fit under it. Except I’d forgotten about the airvent on the roof. It caught the wires and pulled down the washing line poles. Some feverish spadework got them more or less vertical again and the old blue Kombi was parked back in its exact spot outside the garage.

Another time I reversed into the tap at the horse trough, the pipe broke and water sprayed out in a long arc. It was evening and the folks were out. Parking the Kombi I hastened to the tap and straightened the downpipe, getting drenched in the freezing water – it was mid-winter. That caused less water to gush but there was still a very visible spout. Rushing down to the front gate I found the stopcock that turned off the main water supply. That fixed it and I went to bed before the folks got home. The next morning I rose very early and turned the stopcock back on. “Hmm, the pipe must have frozen and burst last night” was the consensus at breakfast.

My butt was saved by Harrismith’s frigid winter weather!

*Farnie Schoeman hastened to inform me not all parents were as tolerant as mine here.

Later we were showed how to do car borrowing PROPERLY by Steph de Witt! 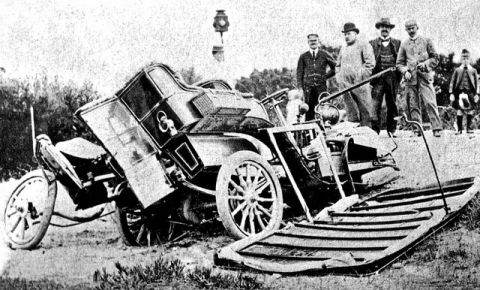 On 1st October 1903, Mr Charles Garlick driving his father’s new 24hp Darracq with his friend Harry Markham and chaffeur Snellgrove as passengers, entered the Maitland level crossing from an open gate, only to find the opposite gate closed. Before they could open the gate or reverse out of the crossing, they were hit by the Johannesburg Express traveling at full speed.

Snellgrove was thrown clear, Garlick suffered minor injuries and Markham, with his arm already in splints from a previous engine-cranking mishap, had a badly broken thigh.

It was announced that the Garlick workshop would undertake repairs to the Darracq. A new chassis was obtained from Paris and the final result testified to the efficiency of Cape Town’s first motor repairers.

From ‘Early Motoring in South Africa’ by R.H. Johnston